Don’t Get Too Comfortable in Business 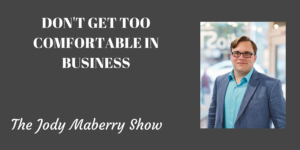 It is possible to get too comfortable in business. I was reminded of that on a recent shopping trip.

It is the season to shop, and I recently visited three stores that left an impression on me.

‘First, was the Disney Store. Have you ever been to a Disney store? It is everything you would expect. It is a magical place. Of course, what they sell is outstanding, but it is bigger than that. The displays, the cast members, the layout of the store are all wonderful. Every detail of a Disney store leads to you having a great experience, and hopefully spending money while you are there. You may not be able to have products that are as magical of what is on the shelf at a Disney store, but you can pay attention to everything else they do. Find the Disney store closest to you and spend some time there. Don’t go there to buy anything, just watch. Watch how people flow through the store. Watch how customers interact with displays, products, and cast members. You can learn a lot spending an hour in a Disney store. As I say, you may not want to buy things there. Not before checking to see if other stores where you can use discounts and coupons have them in stock too. You may want to head to sites like Raise in order to find out what savings are available to you.

Next stop was the Lego store. This was an impressive experience too. Just like walking into a Disney store, you feel like you walking into a special place. They are doing a lot of things right in the Lego Store, too. You can always find an employee. There are more working than you would expect in a store that size, and they are easily identifiable in their bright yellow aprons. There are built Lego sets to look at, there are loose legos to touch, there are some lego sets exclusive to Lego stores. Plus, there is even an interactive display where you hold a Lego box up towards a screen, and right in front of you, the Lego box is instantly built on the screen. There is one thing that really impressed me at the Lego store, though. That was the shelves. They were never empty. If a customer took a box off the shelf to purchase, an employee immediately went into the back, grabbed a new box of the Lego set and put it on the shelf. I don’t know they reason behind this, but it gave the impression that they had everything you wanted. I ever saw when one Lego set sold out; they did not leave the space empty. An employee immediately rearranged the displays on the shelf, so the spot that was empty a moment ago was now full of lego boxes. Within a couple of minutes, there was no trace of the lego set that sold out. Everything they did in that store gave the sense of an abundance of Legos.

My third experience was even more memorable, not because of the store, which was nice, but because of something an employee said to me.

The third stop was Sierra Trading Post. At Sierra, I tried on a pair of dress boots. Once the boot was tied, I stood up and was immediately poked on the heel by something. I took the boot off and, I know this was not my best idea of the day, I stuck my thumb in the boot to see what poked me. Well, it was a nail sticking up from the sole of the boot, and now not only did I have a puncture in my foot, but I also had one in my thumb as well.

Not wanting this to happen to someone else to that pretty size 11 boot, I told one of the workers. I showed him the boot and then he went on to open every box of those boots and check every single boot to make sure no other pairs had that problem. While he did that, I was still browsing shoes, and we talked for a bit. He told me he had a nail come up through his boot once and poke him in the foot. The difference between his story and mine is he is a Marine. He was on one of those long marches Marines do. In the middle of the march, the nail came up from the sole of his boot to poke his foot. I asked him what he did about it. He said nothing. I am a Marine. Pain is just weakness leaving your body. I lost a lot of weakness that day.

How incredible is that? I am a park ranger, but I would have sat down and tried to fix my boot. But this Marine kept on marching.

I thought about the marine the whole way home. Especially what he said about pain is weakness leaving your body. I had never thought of it this way. But I can also apply it to business. The pain you feel in business is helping you get rid of weakness. The pain can come from stretching beyond what you are comfortable with. Pain can be doing something you have never done before. Pain can be rejecting “we have always done it that way.” Pain is making mistakes. Pain was apologizing to a customer when you didn’t perform the way you should have.

All of this pain is weakness leaving your business.

Think of the Marine who I talked to at Sierra Trading Post, when the nail from his boot was poking his foot he felt pain. He could have stopped to fix his boot and felt comfort, but all of the other Marines would have left him behind.

So think about the pain you feel in your business. Is it a sign of growth? Is it an indicator you need to do something different? You should worry if you aren’t feeling pain because you are being left behind.