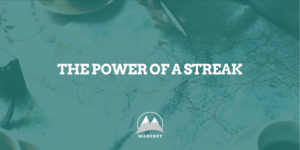 A phone call with Jared Easley changed my life.

Since that phone call, every single day has been different.

Probably not in the way you think.

Did two days make a streak? Maybe not, but perhaps three days in a row was a streak. Certainly, a week full of days made a 10K-a-Day steak.

If I can do a week, I can do a month. And so I kept walking. A month became a year.

One full year of taking 10,000 or more steps every day. Even after that, I kept on walking because I did not want to end my streak.

There are two things I have learned, above all else, during the step streak. First, it all started with a single step.

Second, and probably the biggest, is a streak is powerful. Once you pass the tipping point, you will go to great lengths to keep a streak going.

Once, I boarded a flight to Orlando and then realized I only had 9,000 steps. No way was I going to let the step streak end. Once the fasten seat belts light was off, I snuck to the bathroom and walked in place in the tiny airplane lavatory until I had the 1,000 steps.

I tell you all of that to tell you this…I started writing a weekly email but did not get a big enough streak built up. During a tight travel schedule, I missed a week. Sitting in my hotel room in Eugene, OR, I started writing but decided to skip the email that week.

Which made it easy to miss the next week.

And since I had missed two weeks, I thought I could take a little break before sending you another email.

Now, there have been months between emails. And I am reminded of what has led me to take all of the steps, taking the first step and building a steak.

If you want to build momentum, start this week. Whatever you want to do, don’t put it off any longer. Take the first step as soon as possible.

Hold yourself to it until you build a streak you won’t be willing to break.

Whatever it is you want to do, start this week. Take 10,000 steps a day. Run 5 miles a day. Record a podcast episode once a week. Write 500 words a day. Post a new video every week.

Or, in my case, sending you an email every week.

If you can build a streak, you won’t be willing to break it.

Do you currently have a streak going? If so, comment on this post and let me know. It delights me to hear stories of dedication to keep a streak alive.

If you don’t have a current streak, what streak would you like to start?